The last decade has seen dramatic progress in the fight against tobacco, with some 136 countries having implemented policies such as smoking bans in public places, higher taxes or graphic packaging on tobacco products. But there is a huge unmet demand for services to help smokers quit, a critical intervention that lags behind other tobacco control measures, according to the latest World Health Organization report on the tobacco epidemic, launched Friday.

Today, 5 billion people live in countries that have implemented at least one of WHO’s six recommended tobacco control measures – four times more people than a decade ago. This, however, still leaves 2.6 billion people unprotected by tobacco control policies, and “at risk from the health and economic harms caused by tobacco use,” the report warns. The report also found that only 2.4 billon people, or 32 percent of the world’s population, live in countries providing comprehensive smoking cessation services.

WHO’s “Report on the global tobacco epidemic, 2019: Offer help to quit tobacco use” was launched Friday in Rio de Janeiro, Brazil, the second country after Turkey to implement all six of the WHO-recommended tobacco control measures, known as MPOWER.

“Today’s tobacco users will make up the majority of future tobacco-related deaths, which will disproportionately affect low- and middle-income countries,” Dr Tedros Adhanom Ghebreyesus, Director-General of the WHO, said in the report, highlighting the importance of tobacco cessation services in achieving universal health coverage (UHC).

While the report found that per capita tobacco use has declined in most countries, population growth has kept the total number of people using tobacco “stubbornly high” – today, there are an estimated 1.1 billion smokers, of which 80 percent live in low- and middle-income countries, according to a WHO press release that accompanied the report.

“More countries are making tobacco control a priority and saving lives, but there’s still much more work to be done,” said Michael Bloomberg, WHO Global Ambassador for Noncommunicable Diseases (NCDs) and Injuries and founder of Bloomberg Philanthropies, in the report. “The WHO’s new report shines a spotlight on global efforts to help people quit using tobacco and it details some of our most important gains.”

But these global efforts have faced a number of setbacks and challenges, including political obstacles and interference from the tobacco industry. “[T]he fight against an aggressive and ever evolving industry is far from over,” Bloomberg noted in the report.

A new database, released yesterday by STOP (Stopping Tobacco Organizations and Products), an initiative of Bloomberg Philanthropies, is aimed at exposing the groups that help tobacco companies undermine public health, in order to reduce support for the industry and aid in global efforts to implement tobacco control measures.

In 2007, the WHO Framework Convention on Tobacco Control (FCTC) launched its MPOWER measures, designed to promote government action across a set of evidence-based interventions to reduce tobacco use, save lives and reduce healthcare costs. These include:

“Quitting tobacco is one of the best things any person can do for their own health,” Dr Tedros said, quoted in the release. “The MPOWER package gives governments the practical tools to help people kick the habit, adding years to their life and life to their years.” 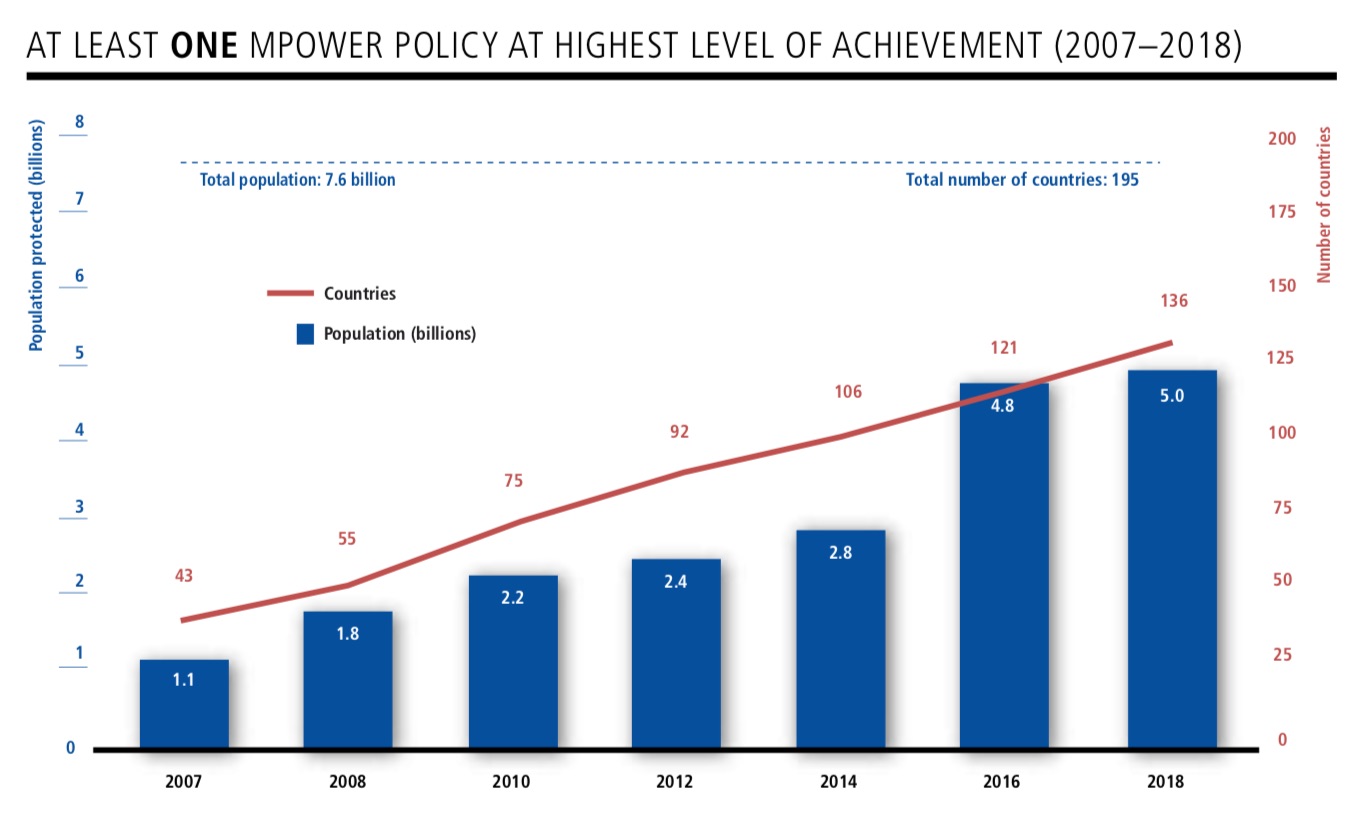 Progress Slow on the “O” of MPOWER: “Offer Help to Quit Tobacco Use”

While there is overall progress in the fight against tobacco, the report highlights the important gap of unmet demand for cessation services, noting that many tobacco users want to quit and need help to do so.

“Population-level, cost-effective tobacco cessation interventions must be a priority for countries. At the same time, innovation is to be encouraged and mobile technologies should be fully harnessed to improve access to large and hard-to-reach populations,” Dr Tedros said in the report. 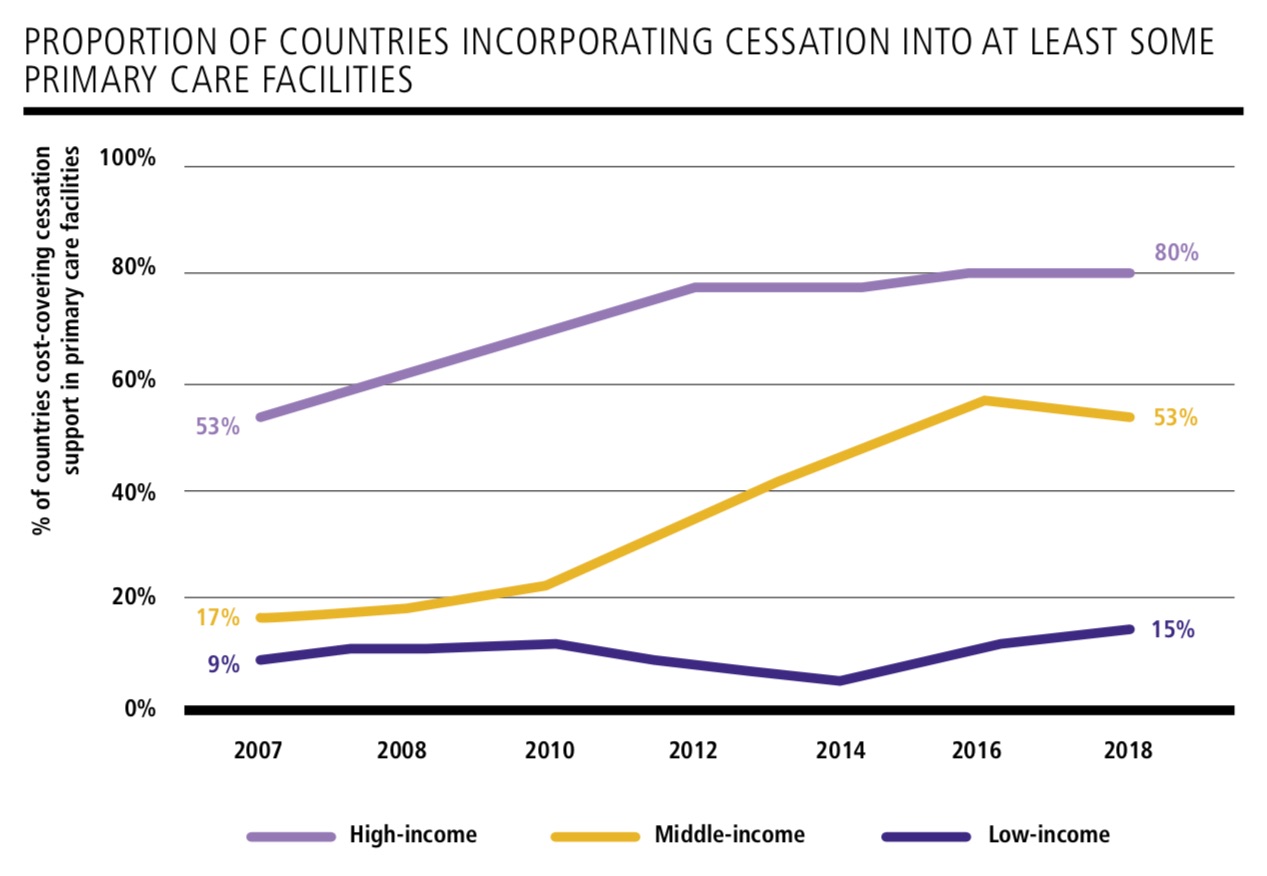 The report notes that progress has been slower in the “O” of MPOWER – “Offer help to quit tobacco use” – compared to other measures since 2007, and that the proportion of the world’s population covered by comprehensive cessation services actually decreased by 1 percent between 2016 and 2018.

In addition to the 23 countries implementing cessation support policies at the highest level, 116 more countries are providing “fully or partially cost-covered services in some or most health facilities, and another 32 offer services but do not cost-cover them, demonstrating a high level of public demand for support to quit,” the release noted.

The report details that “four countries with a combined population of 60 million (Czechia, Saudi Arabia, Slovakia, Sweden) began offering comprehensive cessation services in the past 2 years. Disappointingly, however, the number of people protected by these countries newly adopting best practice is offset by six countries – representing 97 million people – that dropped out of the best-practice group in the same period.”

“Of these countries that reduced services, five were high-income (Brunei Darussalam, Estonia, Israel, Malta and Panama) and one was middle-income (Islamic Republic of Iran). Three of the countries (Brunei Darussalam, Israel and Panama) discontinued their toll-free quit line, and the other three discontinued cost-coverage of nicotine replacement therapy (NrT),” it said.

“There has been incredible progress in the 11 years since MPOWER monitoring began, including millions of lives saved, but it is only the beginning. It is important that we all recommit to ensuring all the people of the world are protected fully from the great harms of the tobacco epidemic,” the report concludes. 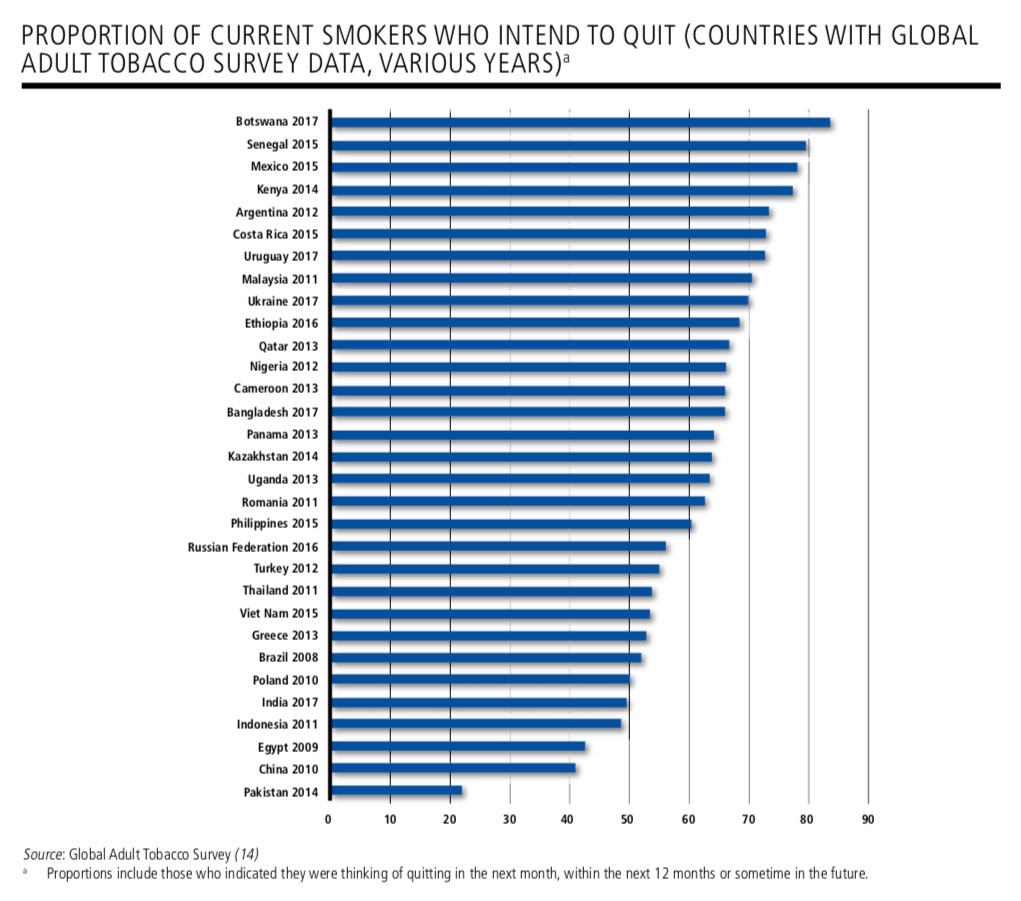